In Germany, just as with an operative abortion, a detailed consultation with a doctor must take place beforehand. They first use an ultrasound examination to clarify the phase in which the pregnancy is, whether there are any medical objections to the method, and inform the pregnant woman about possible side effects and contraindications.

The latter includes, for example, the suspicion of an ectopic pregnancy or a blood clotting disorder. Even for those who have asthma, before taking the abortion pill, it must be ensured that the pills can be administered without risk.

In Germany, a detailed consultation before an abortion is mandatory

How does a termination work?

If everything is fine and there are no concerns, the first thing the pregnant woman must do is take the drug Mifegyne. It contains the active ingredient mifepristone, a synthetic hormone that blocks the effects of progesterone. Progesterone helps the body maintain a pregnancy. After taking Mifygene, the cervix becomes soft and opens, the lining of the uterus loosens. The embryo then dies.

In Germany, the drug must be taken under medical supervision (an exception was made during the corona pandemic – more on that later). In countries like the US, where the legal situation makes going to a doctor’s office for an abortion problematic, the pills are also sent home. But even that can have legal consequences in countries like Poland.

The mifepristone preparation can be taken up to the 63rd day after the start of the last menstrual period. If the pregnant woman throws up within 30 minutes after taking it, she must take another tablet, since the active ingredient may no longer be in the body in this case.

Patients also receive information on contacts who can help if unexpected side effects occur. Doctors recommend having a trusted person nearby for support. As with any intervention in the body, there can be complications when taking the abortion pill. However, this is rarely the case.

About 24 hours after the pregnant woman takes the abortion pill, she may experience bleeding and cramping similar to menstruation. For every fourth pregnant woman who undergoes a medical abortion, it can take longer than 24 hours. Gynecologists recommend taking painkillers if you have pain. In a small number of people, the embryo is already shed at this point in time through heavy bleeding. 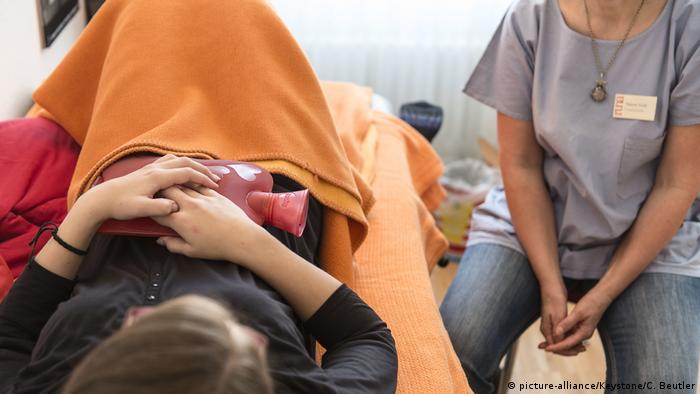 You may experience pain when taking the abortion pill

What do prostaglandins do?

A prostaglandin supplement is given 36 to 48 hours after taking Mifegyne. It induces labor, and the lining of the uterus and the embryo embedded in it are expelled through bleeding, just like in a miscarriage. Up to the seventh week, the pregnant woman receives the preparation in the form of tablets that are swallowed. If the pregnancy is more advanced, the tablets are inserted vaginally.

If the pregnant woman is under medical observation during the process and side effects such as diarrhea, abdominal pain or nausea and vomiting occur, appropriate medication is given.

It is important to take a pregnancy test about a month after the medical abortion. He reassures her that the pregnancy will not continue. In the unlikely event that there is still residual tissue in the uterus despite taking the pills correctly, this will then be surgically removed.

Are there any side effects or complications?

Nausea, vomiting, and diarrhea are common side effects associated with a medical abortion. Gynecologists advise consulting professionals if symptoms have not gone away within a week. However, the bleeding after a medical termination can also last for a few weeks. Infections can also occur, for example when tampons are used to stop the bleeding.

Serious complications after a medical abortion are rare. The natural period usually returns within four to six weeks of taking the medication. Ovulation can occur just ten days after the abortion, and the woman can become pregnant again. Accordingly, it should be prevented in any case.

Is abortion possible via telemedicine?

During the coronavirus pandemic, it has been extremely difficult for women to get an abortion appointment. Many gynecological practices and clinics were closed. A pilot project was launched in Germany to enable women to have an abortion even under these unusual circumstances. This was backed by the pro familia counseling center, the balance counseling center and the Doctors for Choice association.

The whole thing takes place via video switch. This way, pregnant women can talk to a gynecologist and get advice. The medication will then be sent to you in the mail. However, there are still no plans for the initiative, which was born out of necessity, to become a standard procedure. In Germany, most pregnant women still have to see a doctor for a medical abortion.