Lone sock and anti-sock particles (henceforth s+ and s- particles) are rare but not unknown in the universe, but are highly prevalent on earth. Although created as entangled pairs, they often become disentangled and separated. However recent observations by Mrs Mallinson showed a very high ratio (approaching unity) of lone sock particles in her sock drawer which cannot be explained by normal statistical disentanglement processes. This has led some scientists to posit that there may a micro black hole of much less than 1 yocto solar mass lurking in the sock drawer, and the isolated s+ and s- particles are the resultant Hawking Sock Radiation.

For information about Hawking Sock Radiation (HSR), see the figure. HSR occurs when spontaneous s+ and s- particle creation and annihilation processes in the quantum vacuum are interrupted by the presence of a strong gravitational field, such as that produced by a black hole. Normally socks produced in this way appear and disappear very quickly as part of random fluctuations in the vacuum. However, when a pair is produced close to the event horizon of a black hole, one sock may end up falling into the black hole to be destroyed in the gravitational singularity while its twin is emitted, in the process known as HSR. The very high and inexplicable prevalence of lone socks has led Mrs Mallinson to propose that these socks were produced by HSR, which, if verified, raises some important questions for physicists. 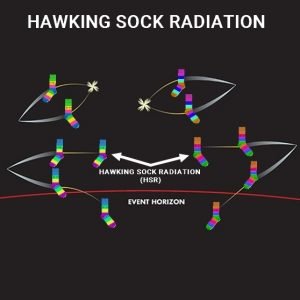 If verified, then the presence of a black hole in a sock drawer on earth is indeed big news. Scientists will want to understand how it got there, and why it is remaining stable. (Black holes of such small sizes usually have lifetimes of a few seconds to a few minutes, unless they are travelling at relativistic velocities. One possible explanation for this extended lifetime is that there are two black holes orbiting around each other at relativistic velocities but this seems unlikely and other processes may be involved.) A very practical concern is how to avoid crossing the event horizon of the black hole (or hole pair) while reaching inside the drawer, with obvious catastrophic consequences for the individual concerned. However, as Mr Mallinson has pointed out, the Schwarzschild radius of a light black hole of order a few kg is much smaller than the radius of an atom, so the chances of intercepting it with a stray finger are small, and hence this should not prevent normal sock drawer operations.