The shortage of medicines occupies a large number of people: pharmacists sound the alarm, medical staff sound the alarm, and last but not least the patients. They are the ones who suffer when an important drug is not available and they are told time and again in the pharmacy: “The drug is currently not available.”

The list of the Federal Institute for Drugs and Medical Devices (BfArM) includes HIV drugs. And there are also delivery bottlenecks in Germany for the vital insulin that people with type 1 diabetes have to inject regularly, although according to the BfArM there are no supply bottlenecks yet.

The BfArM emphasizes that it is important to distinguish between these two terms. “A delivery bottleneck is an interruption of a delivery of the usual scope that is expected to last more than 2 weeks or a significantly increased demand that cannot be adequately met,” says the Federal Institute’s website.

It is particularly important here whether alternative preparations for therapy are available and whether these drugs are currently on the market. In concrete terms, this means that things could get tight if there are no generics. That would be a supply bottleneck.

But short-term delivery problems also mean a considerable additional burden for pharmacists. Because even if generics are available, they first have to be found and procured on the international market. In addition, there is stress and uncertainty among those who are ill. They may have been on the same drug for years and now that it is not currently available they are suddenly asked to switch to a different drug.

If medicines are not available, generics must be used.

The data for the problem list of the BfArM comes from the reports of the drug manufacturers and from the drug and application database (AmAnDa) of the federal government. In addition to insulin and HIV medication, there is a lack of antibiotics, asthma sprays, blood-lowering drugs, anti-cancer drugs, anti-epileptic drugs, ibuprofen and paracetamol. This list could easily be extended. It is a blessing in disguise when corresponding generics are on the market.

Not all active ingredients in the various medicines are essential for the care of patients. “For example, out of more than 250 reports on delivery bottlenecks, only 10 reports concern active ingredients that are critical to the supply,” explains the BfArM. However, if these substances are missing, medicines can no longer be manufactured.

Is there a supply bottleneck?

Martin Scherer from der Degam, the German Society for General Medicine and Family Medicine, sees no shortage of the most important medicines at the moment, at least in Germany. “Perceived delivery bottlenecks are no reason for me as a doctor to prescribe larger packs. That could even be dangerous, since sensitive values ​​such as blood pressure, blood thinning or thyroid values ​​have to be checked regularly and the dosage of the drugs is adjusted if necessary,” says the doctor.

Doctors like Scherer must therefore be prepared to no longer be able to prescribe the original drug for their patients and to dispel any doubts as to whether the copycat drug will work just as well.

There are delivery bottlenecks on all continents

Countries around the world are hit by shortages in the supply of medicines. How serious the problems are for each individual and whether the situation can become life-threatening depends not least on which disease is involved. People suffering from cancer or diabetes, for example, or HIV-positive patients urgently need to take their medication regularly. If the treatment is interrupted or even stopped completely, this can lead to complications. 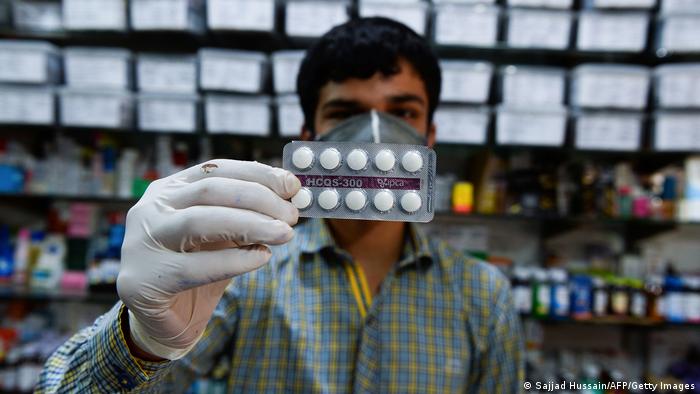 Many medicines are produced in India

When the active ingredients are running out

HIV is spread worldwide. The disease is treated with so-called antiretroviral drugs. So far this has worked well, at least in the industrialized countries.

In a country like India, for example, where the infection rate is particularly high, there are far fewer treatment options. The antiretroviral drugs are simply too expensive. In Germany, the treatment of an HIV patient costs between 20,000 and 30,000 euros every year.

Hardly anyone can afford that. Many are therefore dependent on free HIV medication. These are distributed at government antiretroviral centers. If the delivery falters, the treatment also falters.

HIV is just one problem among many

In many poorer countries there are a number of diseases that practically no longer occur in industrialized nations. Without medical treatment, many of these can be fatal. This includes, for example, Hansen’s disease, better known as leprosy. Another example is snake bites, which are not uncommon in India. These can also be fatal if the situation deteriorates and the necessary medication is not available.

A concern in Vietnam is the lack of a drug used in heart surgery that reverses the blood-thinning effects of heparin, which prevents blood clots.

The situation is no better in many African countries. Access to medicines is already severely restricted there. A drug shortage makes the situation worse. The Research Center for Infectious Diseases at the University of Minnesota, CIDRAP, states on its website that about four million doses of a rotavirus vaccine are missing.

This particularly affects children in Kenya, Tanzania, Senegal and Cameroon. One of the causes of rotavirus infection in young children is diarrhea, which makes their bodies dehydrated. As a result, more than two million children have to be hospitalized every year.

The shortage of medicines is a concern for many

Hospitals and thus operations are also affected when there is a serious supply bottleneck. According to the British Medical Journal, BMJ, the shortage of the drug remifentanil in the UK is already having consequences. The opioid, which is only effective in the body for a short time, is used in surgeries. Patients recover more quickly after anesthesia with this preparation. Longer-lasting side effects can thus be avoided. But now there are delivery problems. The staff in the hospitals must try to find other ways to avoid the side effects that are harmful to the body as far as possible.

The shortage has many causes

Experts see one reason for the current development in the monopolization of the markets. If a production company gets into trouble, that alone can have far-reaching consequences. It is often difficult to quickly find other production sites that could continue production without transition.

The financial side also plays a major role. Many medicines are produced in Asia. The costs there are much lower than elsewhere.

“In a globalized world, drug production is also dependent on global developments,” says Scherer. “It depends, for example, on international raw material problems, price increases and transport difficulties, for example from China or India. In addition, rising energy costs are affecting the supply of medicines.”

If factories have to be closed because the operators can no longer pay the energy bill, the alternatives are often not sufficient. And so doctors, pharmacists, pharmaceutical companies and production plants have to keep juggling with available resources and hope that the drug bottleneck is really only short-term.